This post by Gwladys Ngatchou, IEN Intern, is part of a series in which IEN members and network partners share their thinking about intentional endowment investing to address racial injustice and other diversity, equity, and inclusion themes. Follow along to read an intern's insights on possibility of collaboration between Higher Ed institutions and student organizations.

As the pandemic presses on, a wave of divestment and net-zero commitment announcements from higher education institutions have been made. Georgetown University, University of California, Creighton University, Cornell University, University of Michigan, Stanford University and Harvard University, just to name a few, have all publicly committed to either partially or fully divest their endowments from the fossil fuel industry or to reduce carbon emissions in their portfolio to zero by 2050. Harvard’s net-zero plan, among others, was criticized by some for allowing continued investment in the fossil fuel industry with the hope that these industries will become cooperative partners in the energy transition. One is left to wonder if these commitments are genuine attempts to achieve climate justice or an effort to reaffirm and boost the public image. One can't effectively assess the intentionality of these schools' actions, differentiating empty PR from real economic impact, without greater transparency from endowments. This blog post focuses not only on student organizations' influence in higher education divestment commitments but also on the need for transparency about endowment portfolios.

Harvard’s endowment is one of the largest in the country, but its investment in fossil fuels remains a mystery as it is nearly impossible to find out exactly how much of Havard’s endowment is invested in oil, gas, and coal companies. Even though the school doesn’t share much on information its investments, South Pole Group analyzed $989 million of Harvard’s $36.4 billion endowments in 2015 at the request of Divest Harvard (a student-led grassroots movement) and 350.org. The group estimated that the overall endowment was responsible for annual emissions of  11 million tons of carbon dioxide. 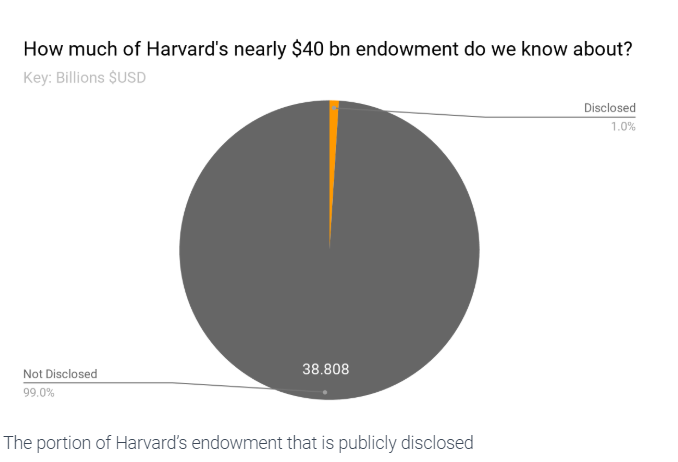 Lack of transparency around endowment investments is a common practice among higher education institutions, and when Harvard students asked for more information, they found themselves turned down as they were viewed as uninformed or intrusive. This was Davi Lockwood (a 2014 Harvard graduate)’s experience when she asked Harvard President, Drew Gilpin Faust, to divest from fossil fuels, and the president answered that students didn’t understand investments. While many students are not well-informed on how financial investments work (largely due to their basic education syllabus not including training on personal finance or institutional or individual investor practices), upon arriving in college, these students find themselves in important roles as stakeholders in major institutions that depend on the monetary resources that endowments control.

Regardless of their financial background and training, students are aware and know a lot about what they want to see in the world, especially when it comes to the environmental and social risks to their future, and are willing to learn about endowment governance and investing as an effort to achieve climate and social equity. Higher education institutions should, therefore, consider collaborating with students in their fossil fuel divestment journey not only as a demonstration of genuine intention to achieve climate justice, but also as a way to prepare these students who may become future endowment managers. There are great examples of institution and student organization collaboration and effective student activism when endowment stakeholders commit to learning more.

Some great examples of student collaboration are illustrated in an article by Arjun Thakkar that gives an overview of how student divestment movements gradually gained traction all over the country. Another concrete example of how students’ movements have played a part in higher education fossil fuel divestment commitments was the UCSB Divest group’s three-day sitting protest in 2017 that contributed to a public endorsement from chancellor Henry T. Yang, who agreed to work with other UC Chancellors to divest about $3 billion from fossil fuel companies in the UC portfolio. The University of California became fossil fuel free in May 2020, a little over 5 years after the decision to divest as a result of student engagement and an exploration of the environmental and financial impacts.

Where Do We Go From Here?

Toward my final year as an undergrad student of UMASS Amherst, I secured an internship opportunity with the Intentional Endowments Network with no knowledge of endowments and how intentionally invested endowments could lead to social and climate equity. Little did I know of the laborious contributions of students in ensuring that higher education institutions’ trustees, investment managers, and asset managers remained accountable to their fiduciary duty. The more I question why I had never heard about this divestment movement on my campus, the more I learn about how major student protests have contributed to endowment investment shifts in higher education institutions.

It is clear that these student grassroots movements have no intention of slowing down until they are reassured that institutions are doing what they need to do to achieve climate and social justice. Institutions, and higher education institutions in particular, can and should use endowments not just as a financial instrument, but as a learning tool for educating and engaging students in the investment world. Colleges and universities can be transparent by giving students the opportunity to learn and be involved in institutional investing through student-managed funds allocations, invitations to shadow investment committee meetings, and by creating active committees on investor responsibility. Instead of resisting students’ questions and inputs, institutions need to work in synchrony with students’ organizations as a way to demonstrate real intent in being part of the ESG solution wagon.