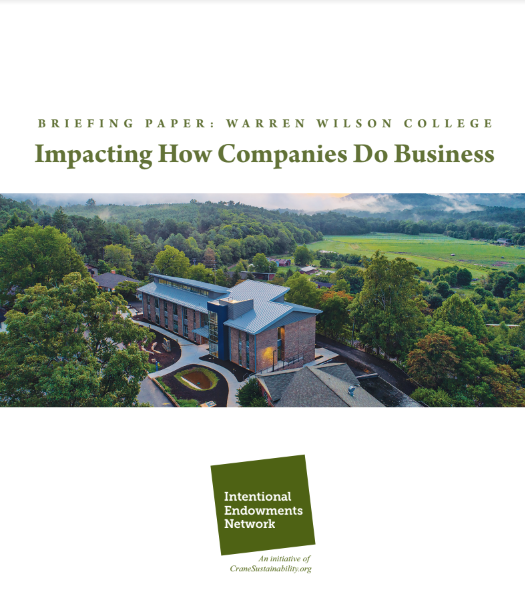 Warren Wilson College (WWC) is a liberal arts college in North Carolina and a leader in environmental and social sustainability. In the past 5 years, WWC has focused on applying environmental and social equity lenses to the management of its endowment, including publicly committing to divest from fossil fuels and beginning to fully integrate environmental, social, and governance (ESG) factors into the investment process.

In 2019, WWC began exploring active ownership as a way to expand the positive societal and environmental impact of its investments, while also reducing risks and maximizing returns in its endowment portfolio. You can read a background on WWC’s work implementing sustainable investing strategies, with a focus on shareholder engagement, in IEN’s 2020 resource: Active Ownership in the Endowment: Warren Wilson College Case Study.

Through partnerships with As You Sow and the Intentional Endowments Network (IEN), WWC has made an impact by actively engaging the companies the endowment invests in, and as a result, can point to real change addressing the college’s two mission-driven focus areas: climate change and racial justice.

During the 2021-2022 engagement season (fall of 2021 through end of June of 2022), Warren Wilson College signed 32 letters of authorization allowing As You Sow to enter into dialogue and submit shareholder resolutions to companies WWC invested in. Of those 32 signed letters of authorization to engage, As You Sow did not file 14 of the resolutions, as dialogue with each company prior to filing led to an agreement. As You Sow did file resolutions with 14 of the 32 authorized companies, and dialogue with 12 of the 14 companies where resolutions were filed led to impactful agreements that addressed the resolution request sufficiently for all outcomes at companies where WWC authorized engagements.

WWC has also influenced the actions of companies through proxy voting. From March 2021 through January 2022, 13,000 proxy ballot line items were voted on WWC’s behalf at approximately 1,200 companies, including 420 shareholder proposed ballot items.

Colleges and universities across the country can learn valuable insights from the process WWC has developed and followed to engage with the companies in their endowment investment portfolio through proxy voting and shareholder resolutions. 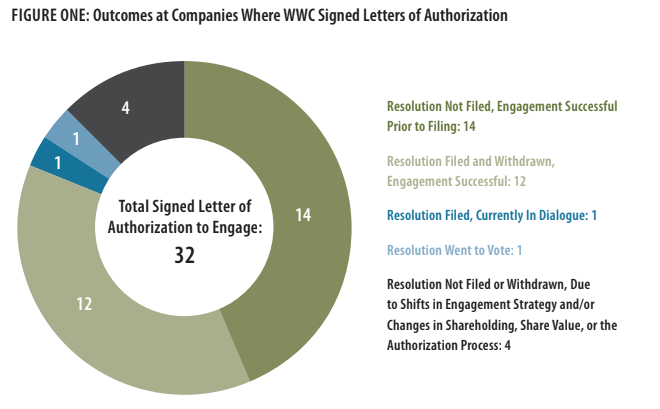 Warren Wilson College’s engagement work is a collective effort made possible through partnerships with the Intentional Endowments Network and As You Sow. The following people have played critical roles in both the implementation of the work outlined in this briefing paper, and the writing and review of this document: