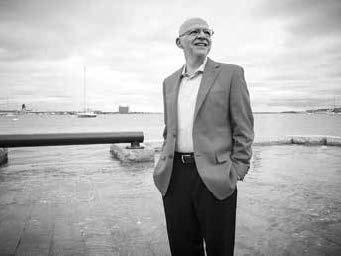 David Levin published an excellent article about Anthony Cortese in the Winter 2015 Edition of the Harvard School of Public Health Magazine. The article describes Tony's passion for the environment and his subsequently extensive environmental career from being one of the first employees of the Environmental Protection Agency in 1970, to his most recent project, launching the Intentional Endowments Network this past summer.

David Levin is a Boston-based science journalist. He can be reached through his website at www.therealdavidlevin.com.

On a clear day, the air outside Anthony Cortese’s office in downtown Boston is filled with the unmistakable smell of the ocean—a pungent, brinelike perfume that hangs in the morning air. It floats in from the Inner Harbor, where fishing boats lazily motor out to lobster traps set just offshore.

It’s a pure New England scene, but it wasn’t always so idyllic. Cortese, SD ’76, who grew up in Boston’s North End neighborhood, remembers the harbor very differently. Throughout his childhood in the 1950s and ’60s, few people lingered on the shoreline. Raw sewage and industrial waste often clogged the water, and the air hung heavy with soot from industrial sites and the Central Artery, an infamous stretch of elevated highway that sliced downtown Boston in half after its construction in 1959.

Cortese never forgot what it was like to be surrounded by neighbors who directly suffered from these ubiquitous industrial contaminants. For him, it drove home one point: Environmental conditions are inseparable from the public’s health.

This realization set the stage for Cortese’s future work. He was one of the initial employees of the U.S. Environmental Protection Agency (EPA) when it was created in 1970. From 1979 to 1984, he served as commissioner of the Massachusetts Department of Environmental Protection (MassDEP), where he developed programs to address air and water pollution, hazardous waste, and drinking water quality. In the late 1980s, Cortese became the first dean of environmental programs at Tufts University and founded the school’s Environmental Literacy Institute, one of the first to foster environmental education as a foundation of learning for all students, regardless of major.

By 1993, Cortese co-founded Second Nature, a Boston-based nonprofit that promotes sustainability at colleges and universities. This summer, having launched with a colleague the Intentional Endowments Network, he has been working to broaden that effort by supporting mission-driven, tax-exempt organizations to align their endowment investments with their health, social, and environmental values.

Inspired by The Six Cities Study

It’s a storied career, but for Cortese one of the most influential experiences came at its start, while he was earning his doctorate at Harvard Chan. At the time, the School had just begun its now-famous Six Cities Study, an in-depth survey of the health effects of air pollution on more than 8,000 participants in six towns across the Midwest and New England. Cortese had moved to Harvard after a stint working on air quality management for the U.S. Public Health Service, and he was thrilled.

“It was an incredible time to be at Harvard,” he says. “The School was collecting real air pollution exposure and health data and showing that a significant number of people were dying each year as a result of exposure to these pollutants. The effects turned out to be even more harmful than we had originally thought in the early 1970s.”

This excitement around the Six Cities Study—research being conducted by his friends and mentors at the School—shaped Cortese’s own work. For his thesis, he conducted a survey of urban residents’ carbon monoxide exposure using portable sensors, a strategy that helped verify ambient measurements. Soon after graduation, he became the new head of MassDEP’s Air Quality Division. By 1979, Cortese moved on to become commissioner of the department itself.

During his time in office, he implemented new regulations to encourage water conservation and protect water supply in the state, control the production of hazardous waste and speed its cleanup, and cap the allowable release of sulfur and nitric oxides—pollutants that cause acid rain. Years later, the federal government would adopt remarkably similar legislation as part of the Clean Air Act of 1990.

None of these achievements came easily. Industry and some state and local government opponents attacked the science behind the new laws. Some critics claimed the regulations would be too expensive or would cause severe economic distress. “There was a certain kind of inertia we had to overcome,” Cortese says. “When you do this kind of work, what you’re really doing is promoting a cultural change—and cultural change is hard. It doesn’t come overnight.”

After 17 years in public office, the agonizingly slow bureaucratic process involved in passing new regulations began to wear on him. “I always feel that I’ve been behind the times of what society needs—and ahead of what it’s willing to do. In this case, we constantly came up against people with a mind-set of ‘jobs versus the environment;’ or ‘grow now, worry later,’” he says. “But if you wait too long, the health impacts are irreversible. If someone gets cancer, all you can do is treat it and hope for success. If your rivers and forests are contaminated enough by acid rain, then fish die, trees die. By the time you see the effects of environmental damage, it’s often too late.”

In the mid-1980s, Cortese shifted his focus back to academia as dean of environmental programs at Tufts. Returning to the nonprofit world, he founded Second Nature with Massachusetts Senator John Kerry and his wife, Teresa Heinz, serving as president from 1993 to 2012. Second Nature has addressed environmental issues through the lens of higher education. Instead of just teaching a few classes on sustainability, Cortese says, he wants colleges and universities to encourage environmental thinking across all disciplines and to model economic, social, and environmental sustainability in all aspects of their operations: purchasing, infrastructure, transportation, investments.

Even small changes on campus, he adds, can create a lasting impression on a college community—from creating biking and walking paths to using locally sourced foods in cafeterias. With these examples, he hopes that schools will have not only an immediate impact on their local environment, but also a long-term influence by instilling environmental values in graduates.

“That’s an incredibly visionary approach,” says Douglas Dockery, MS ’74, SD ’79, a former classmate of Cortese’s who is now chair of the Department of Environmental Health at Harvard Chan. “It makes enthusiasm for, and a commitment to, the environment intrinsic, not an afterthought. From a public health standpoint, that’s essential for preventing future environmental problems rather than just trying to remediate them.”

Over the past 20 years, Second Nature has worked with thousands of schools nationally and worldwide to achieve those goals, and has met with growing success. Even within the last decade, Cortese says, he’s seen a sea change in environmental thinking within higher education. Since 2006, nearly 700 schools have signed on to his former organization’s largest initiative, the American College and University Presidents’ Climate Commitment. Signatories make a publicly accountable commitment to become carbon neutral, transform their curriculum to include education for sustainability, and work with other colleges or universities to do the same.

It’s a commitment that benefits both students and the universities themselves. “Many of those schools have reduced their greenhouse gas emissions by up to 25 percent during a time they were growing rapidly, and have saved more than three billion dollars in the process,” Cortese says. “That’s pretty remarkable.”

A Future Without Waste

Looking back, Cortese feels that these myriad accomplishments only scratch the surface, particularly with global climate disruption, which he calls an “existential crisis.” Right now, he says, public health focuses on preventing conditions in the environment that could cause disease— but he wants the field to reach further. He believes sustainability should be a major consideration in the way we design buildings and cities, produce food, develop and regulate economies, and, most important, in the way we educate, so that it becomes “second nature.” His current public health vision: a society running on renewable energy, where the concept of waste is eliminated and one industry’s garbage becomes another’s raw materials. Put simply, we would live off nature’s income, not its capital.

That’s a tall order, but Cortese’s determination is clear: “You can go three minutes without air, three days without water, and three weeks without food. All the resources that make life possible come from the earth, yet we take for granted what it takes for us to live,” he says. “To me, environmental protection is the most fundamental way we can prevent illness and support wellness.”