Climate Progress of US and UK’s Higher Ed Institutions

This post by Cam Do, of IEN, explores how US and UK Universities have responded to climate change and committed to reducing greenhouse gas emissions in the last decade.

Universities around the world, particularly in the US and UK, have responded to climate change and committed to reduce greenhouse gas emissions in the last decade. One of the metrics to measure a university’s effort is its divestment progress in fossil fuels. As of 2020, half of the UK universities have committed to divest from fossil fuel while the US is falling behind with only 5% of four-year public and private universities/colleges divested based on the Intentional Endowment Networks (IEN)’s internal tracking. Although divestment may not alone accurately reflect the overall state of the field and may not be suitable to all endowments’ investment strategies, the difference in the percentage of universities divested have inspired me to look at the underlying catalysts.

In October 2006, 12 founding institutions signed the American College and University Presidents’ Climate Commitment (ACUPCC) organized by Second Nature to create a network of colleges and universities that commit to eliminate their net greenhouse gas emissions and promote research and education on sustainability. ACUPCC, now called the Climate Leadership Network, has expanded to 430 members with the additional goal of carbon neutrality with climate resilience. Although the US government has debated climate change policy and signed the Paris Agreement during Obama’s administration in 2016 (President Trump later withdrew the US in 2017), the US Congress still has not implemented a comprehensive greenhouse gas emissions reduction plan.

Meanwhile, the UK has taken a more comprehensive and unified approach. It adopted the Climate Change Act in 2008 with a near unanimous vote requiring colleges and universities to take action in order to contribute to the national targets for carbon reduction. The legally binding goal has resulted in mandatory carbon management plans for all institutions. The UK has shown how national climate change legislation can guide institutional action and dramatically cut emissions.

The US and UK contain many of the most prestigious higher education institutions worldwide, but differ greatly in organizational structure. UK institutions are mostly publicly funded by the national government. Only around 8 institutions are considered private among the 160 UK universities in total. Since the vast majority of them receive direct funding from the public, the government can exercise considerable influence on their affairs.

The US higher-education system serves a much larger population than the UK and has much more diverse types of institutions. Out of four-year colleges and universities, there are approximately 1,620 public schools and 680 private schools. Private institutions, including Ivy League universities, are much more dependent on donors because they do not receive direct public support for tuition and general operation. This is a particular problem for the 800 private colleges that have an enrollment of fewer than 1000 students which are almost entirely tuition-driven with very small endowments. These schools face a greater risk of enrollment decline and possible closure. Nearly 50% of all students at public institutions go to 2-year, non-residential community colleges which traditionally have minimal donor support and endowments. These factors result in difficulties obtaining shared consensus with decision-makers on orienting endowment investments to have a positive impact on justice, equity and climate challenges.

Pressure from the student population also motivates the school to take action to address sustainability. Compared to the US which has diverse divestment themes, the student movement in the UK primarily concentrates on fossil fuel. Due to the centralizing focus on fossil fuel, The People and Planet group has managed to create structured, uniformed campaigns to press universities on changes for climate action. Their annual ranking, People and Planet University League, scores UK universities according to ethical and environmental performance with detailed metrics. This gives schools the incentive to adopt more actions on addressing sustainability in order to rank higher on the league table the following year. They have also developed the Fossil Free Declaration with SOS-UK, attracting 16 universities so far to affirm their current fossil free status and commitment to remaining so in the future. These collaborative efforts between the student groups and universities considerably push forward the UK national sustainability trend.

Meanwhile, the US institutions’ sustainability approach has been much more decentralized, partly due to the diversity in higher education types and board structures. Nonetheless, student groups have made substantial progress, including DivestEd who have created a national live map that indicates colleges that have been part of the fossil fuel divestment movement. The College Climate Coalition also coordinated the #NobodyWins campaign where 500 students and alumni stormed the 2019 Harvard-Yale game, risking arrest to call on their universities to divest from the fossil fuel industry and cancel their holdings in Puerto Rican debt. These efforts have received attention from the press and social media, increasing awareness in these strategies to address the climate crisis. In addition, The Association for the Advancement of Sustainability in Higher Education (AASHE) establishes The Sustainability Tracking, Assessment and Rating System (STARS), a transparent framework to measure universities’ sustainability performance. As of June 2020, among the self-reported schools, 7 have achieved Platinum status, the highest recognition STARS awards, while the majority of the colleges have ranked either Gold or Silver. Based on the STARS reports, Sierra Club, another US environmental organization, have created the annual Cool School Rankings to nudge healthy competition among schools and raise environmental standards on campus. 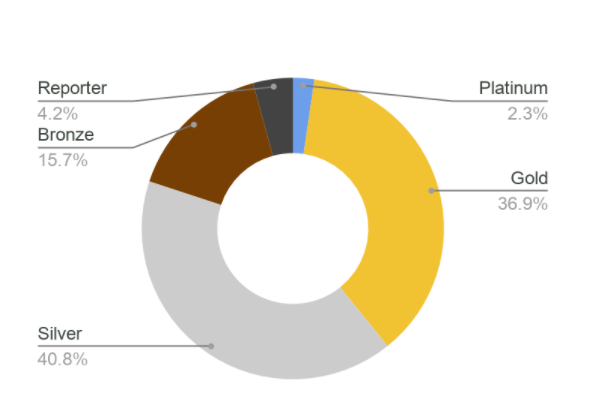 AASHE STARS Ratings as of June 2020

While the percentage of US institutions committed to divestment is significantly lower than the UK, America has a larger number of committed universities due to its greater size. The variety of institution types and structures among US institutions has created a largely decentralized sustainability approach. Nonetheless, Institutions of all types and sizes are making significant progress— Arizona State University, a public institution with enrollment surpassing 100,000 students, has integrated Environmental, Social, and Governance (ESG) metrics across all investment while Hampshire College, a small private liberal arts college, has aligned investment holdings with its socially responsible missions.

Besides divestment, institutions may take a different approach to address climate change risks in their portfolio. For example, colleges and universities (even student-managed funds) may hold on to fossil fuel stocks to engage in shareholder advocacy with these companies. In 2016, The Dwight Hall Socially Responsible Fund run by Yale students became the first student group to co-file a shareholder resolution pushing ExxonMobil for more transparency in lobbying. The resolution won 25.8% of shareholder votes representing $100 billion in equity. This illustrates how even small shareholders can put pressure on companies to be more progressive on their environmental commitments.

Colleges and universities have also increasingly tackled climate change through carbon neutrality. Although Harvard University has not divested, they pledged to transition their investment portfolios to net-zero greenhouse gas (GHG) emissions by 2050. Recently, the University of Oxford agreed to divest from fossil fuels while committing to a net-zero investment strategy as well. Similarly, other institutional investors have also come together to pledge a net zero investment portfolio by 2050, such as the members of the Net Zero Asset Owner Alliance, which was formed at the UN Climate Summit last year.

It is impossible for this blog post to detail all progress made in both countries. I encourage readers to take a more active role in pushing higher education institutions forward with their sustainability plans. Check out these resources from IEN for more information:

Financial Performance of Sustainable Investing: The State of the Field and Case Studies for Endowments