Paying Attention to CEO Pay: Are You Overcompensating the Executives in Your Endowment?

This post by Sydney Gerbel, Sustainability Intern at IEN, analyzes the relationships between executive compensation, financial performance, and the fiduciary duty of endowment managers using data from As You Sow's "100 Most Overpaid CEOs" report.

When a company decides to allocate more capital to pay its CEO, does the company perform better or does it just end up with a wealthier executive?

After the Dodd-Frank Act of 2010 required companies to allow shareholders to vote on executive compensation and mandated the disclosure of the ratio of executive compensation to average employees’ earnings, concern over the wide gap between pay levels grew. While ethical considerations led this conversation in its early stages, enough data has now been released to uphold the argument that overpaying CEOs puts the financial health of a company at risk.

As You Sow reported this past February that the companies employing the most overpaid CEOs in multiple years performed significantly worse than peers in the S&P 500 who had never made the list. They found that between 2015 and 2020, the annualized total shareholder return of frequent offenders on their “100 Most Overpaid CEOs” list was 1.95 percent, while their peers achieved 5.6 percent – evidence that the long-term value of the firm is not being prioritized. In the long run, value is created when the structure of executive compensation aligns with the interests of employees, customers, and shareholders, not just those in high-ranking positions. 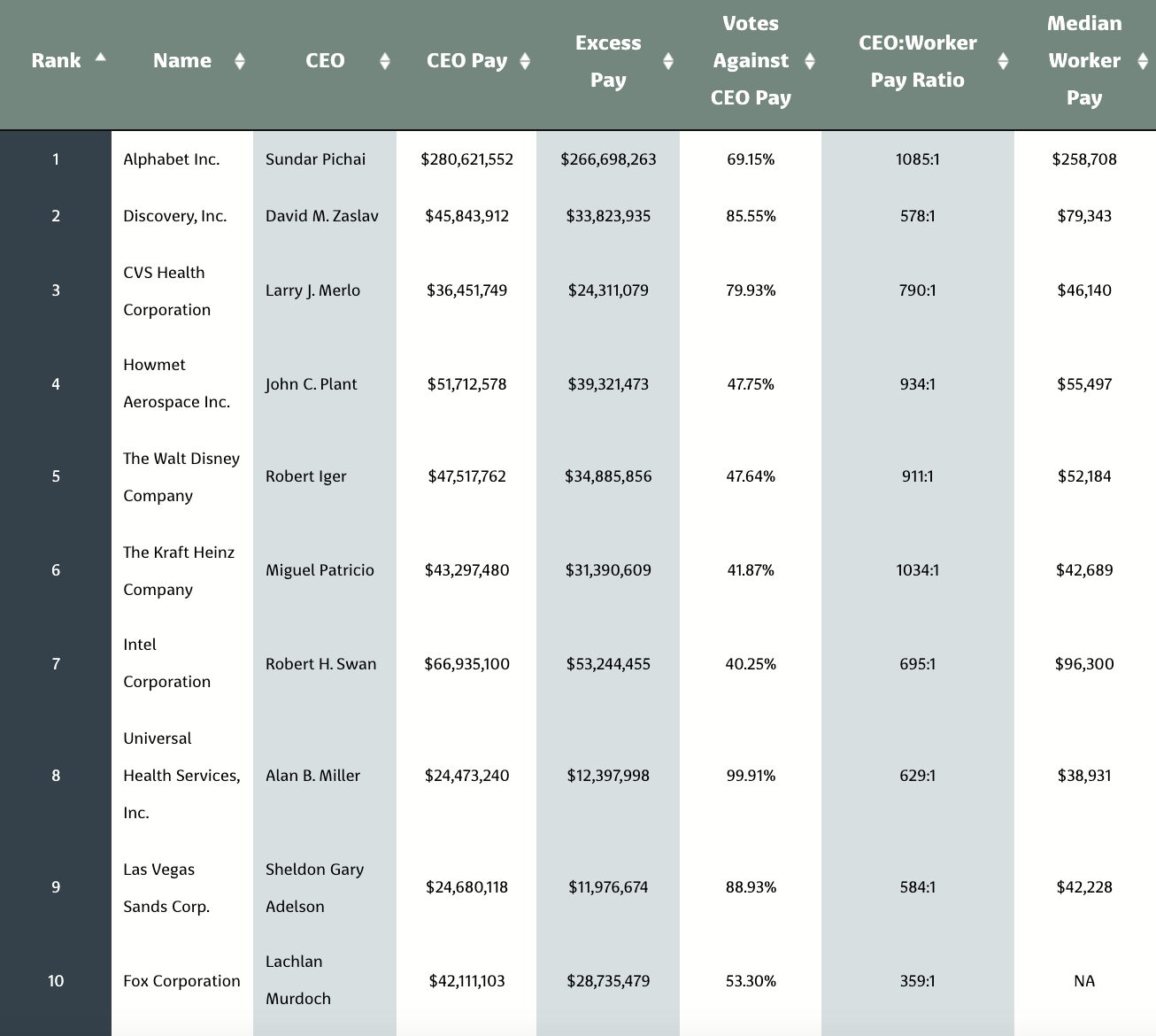 Source: The 100 Most Overpaid CEOs (As You Sow)

Each year endowment leaders are given the opportunity to vote on CEO pay when voting their proxies, but most turn over that fiduciary duty to asset managers who invest on their behalf. As part of their oversight role, endowment managers must ask themselves whether or not that voting is creating long-term (or even short-term) value.

For example, many institutional investors, including endowments, use inexpensive index funds like those managed by State Street, BlackRock, and Vanguard to capture the returns of the whole market. Consequently, those three managers dominate the index fund industry and in aggregate are the largest shareholder in 88 percent of the market cap of the S&P 500 according to a 2017 report; yet, these index fund managers often vote to approve company-proposed pay packages, which is not always in the long-term best interest of investors.

In the 2020 proxy year, both BlackRock and Vanguard voted against fewer than 5 percent of S&P 500 companies’ proposed CEO pay packages. Each of these two managers also did little to vote against CEO pay at the 100 companies with the Most Overpaid CEOs according to As You Sow, at 8 and 17 percent votes against, respectively. This may help explain why the pay gap has only grown despite widespread societal support for reducing discrepancies in earnings. 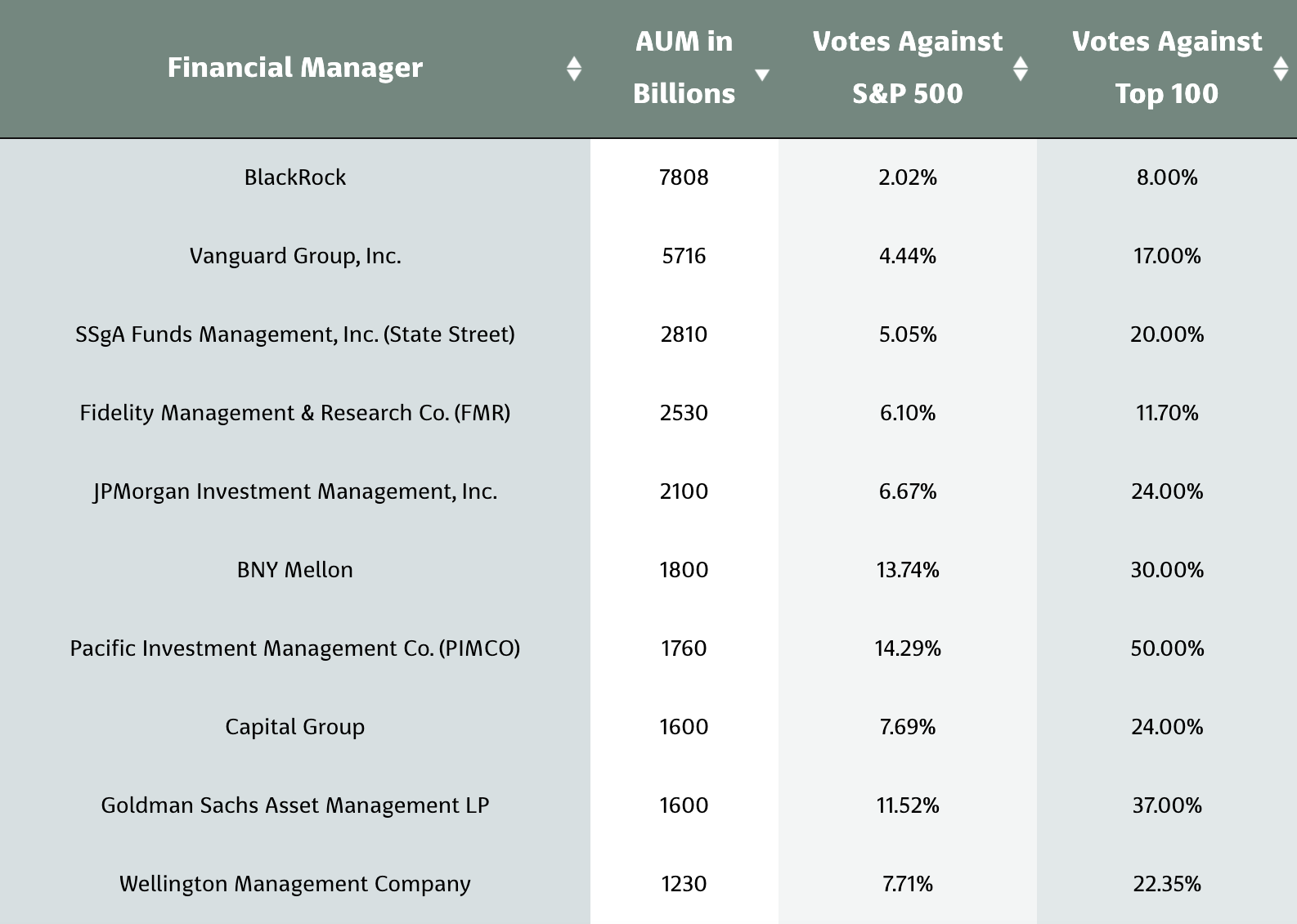 Source: The 100 Most Overpaid CEOs (As You Sow)

To be better fiduciaries, endowment managers can address excessive executive compensation by completing some (or all) of the following steps:

1) Require that asset managers provide their most recent proxy voting records on CEO compensation. Once these records have been analyzed, it will be easier to start a productive conversation on the link between financial performance and executive compensation. Future voting records can be used as a means of accountability going forward, so endowment managers should be sure to request them on an annual basis. If an organization does not have a direct relationship with its managers, consultants overseeing the asset management process should be able to aggregate information on how their managers voted.

2) Transfer funds out of commingled accounts and into separate-managed accounts in U.S. equities. The managers of these new accounts can give greater consideration to the ethical priorities of the institution and can cast proxy votes on behalf of the organization to ensure certain ethical standards are upheld. After moving funds into separately-managed accounts, services such As You Vote or ISS can help with proxy voting along a predetermined set of guidelines, which can include addressing inflated CEO compensation.

Continued voter support for compensation disclosure and pay gap reduction over time can enable public policy to further address this subject, potentially resulting in regulations such as further disclosure requirements or limits on the earnings ratio. Furthermore, the effects of the pandemic continue to apply pressure on executives to voluntarily reduce their paychecks so that their companies can bring back furloughed workers and address general employee welfare.

Endowment managers have a fiduciary responsibility to work in the best interests of future generations of beneficiaries. By addressing the topic of executive compensation in public companies, managers can ensure stronger and more sustainable returns to fund their organization’s development.

Keep in touch with Sydney here.